Food Corporation of India has been playing a vital role in ensuring Food Security in the country by procuring foodgrains from farmers at Minimum Support Prices and ensuring its storage and preservation as also movement of foodgrains across States to meet the requirements of National Food Security Act, Public Distribution System and Other Welfare Schemes. FCI alongwith State Agencies have a combined storage capacity of almost 73 million tonnes. FCI has 1841 depots which ensure proper storage and quality of foodgrains.
In order to provide information with regard to storage capacity of FCI depots, FCI had organized a contest on the MyGov platform to select design template for signboard which can be put up on FCI depots and offices. The contest was opened from 14th October 2014 to 30th October 2014 during which a total of 541 entries were received. None of these entries conformed to the technical criteria laid down for the contest and accordingly the contest was revived from 13th January 2015 to 20th January 2015 during which 343 entries were received.
Based on the criteria enunciated in the contest and number of likes received on the MyGov post, FCI is delighted to declare Mr. M. Fakeera from Telangana, Hyderabad as the winner of the contest of designing the template for signboards for FCI offices and godowns.
The selected design is as below:- 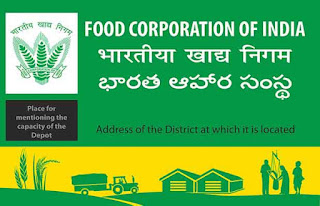